On Sunday, Americas Cardroom is launching another OSS Cub3d tournament series. It’s their 11th one. And it promises to be epic 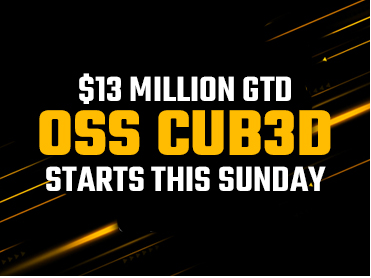 The OSS Cub3d starts this Sunday, February 7th, and runs through March 14th. Just like all previous incarnations of the OSS Cub3d, this one has three tournament series rolled into one — the MOSS, the OSS, and the BOSS.

If you’re new to the OSS Cub3d:

In addition to the $13 Million GTD OSS Cub3d, they are having Valentine’s day special with a $300,000 PKO tourney to kick off the series.

In addition, Americas Cardroom is giving you a chance to win a $2,650 seat in the Venom through their recent Social Media contest.